Trump Needs a Couple of Depends Changes Tonight. by El Jefe
Thursday January 20th, 2022 at 7:47 AM

Late this afternoon, SCOTUS surprisingly ruled that the National Archives can release TFG’s  January 6th records to Congress.  TFG lawyers have been throwing everything, including the kitchen sink, in an effort to stop the disclosure.  Characteristically, Clarence Thomas dissented.  Jesus.

A fun and often useful way of getting perspective on events from what seems like the relatively recent past is to take the time interval between those events and the present, then count back an equal time into the past [1].

For example, The Beatles first big hit, Love me Do, came out 60 years ago, in 1962. Going back 60 years to 1902, the hits of that year included Scott Joplin’s ragtime number The Entertainer. The recent buzz around Get Back can be compared to the revival of interest in Joplin generated by the Newman-Redford movie The Sting[2]

A more memorable event for most who were alive at the time was the assassination of John F Kennedy in 1963, that is, 59 years ago. Going back 59 years gets us to 1904, only three years after the previous US Presidential assassination, that of William McKinley. At least according to Wikipedia, the immediate reaction to the McKinley assassination was comparable to that after Kennedy’s. However, McKinley was overshadowed by his successor, Teddy Roosevelt in a way that didn’t happen with LBJ and JFK. So, AFAICT, McKinley’s assassination was pretty much forgotten by the time of Kennedy’s election[2]

As far as left politics goes, a comparable observation that the events of May 1968 are closer to the October Revolution than to the present.

Looking at intervals like this gives an idea of whether change has been fast or slow. For example, the beginning of the Jet Age of passenger jet transport is commonly dated to the introduction of the Boeing 707 in 1958, but there’s also a case for the 747 introduced in 1969. Counting back from these two dates gives a range from 1894 to 1916, neatly bracketing the Wright Brothers in 1903. The massive advances from the Wright Brothers to the early 7x7s contrast sharply with the near-stasis since then (punctuated by the failure of the Concorde). Today’s 7x7s and their Airbus competitors differ most notably in the fact that the passengers are packed in tighter, and more effectively pacified with digital entertainment. The newer planes are more fuel efficient, safer and not quite as noisy, but those are incremental advances in an industry that used to symbolise modernity and technical progress.

That’s enough from me. Anyone else have a favorite?

fn1. The first time I saw this was in a look back at at an ANU Revue, during the Vietnam years, on the theme Hits of the Blitz. The author pointed out that the Vietnam War was now further in the past than WWII had been at the time the show was put on.
fn2. Doing the same thing for The Sting (1973) takes us back to the silent era and The Thief of Baghdad
fn2. Some fans of numerology noted that the winners of the 1860, 1880, 1900 and 1960 elections had been assassinated. Adding the 1840 1920 and 1940 winners, who died in office (though Roosevelt survived his third term, and won again in 1944), this produced the “Curse of the Zero Years”

Who Benefits from Canceling Student Loans? by conversableeconomist
Thursday January 20th, 2022 at 7:39 AM

Student loans are packaged together and then sold as financial securities, just like auto loans and credit card debt and home mortgages. These asset-backed securities pay a return to their investors as the debts are repaid. If outstanding students loans were to be cancelled, then the investors in this securities would probably be bailed out by the federal government–which was closely involved in securitizing these loans in the first place, and does not want to get a reputation for reneging on its debts. If such a debt cancellation happened, how would the benefits be distributed? Adam Looney tackles this question in “Student Loan Forgiveness Is Regressive Whether Measured by Income, Education, or Wealth: Why Only Targeted Debt Relief Policies Can Reduce Injustices in Student Loans” (Brookings Institution, Hutchins Center Working Paper #75, January 2022).

One basic insight of the paper is that those who have college degrees will tend to have, on average, more income, education and wealth over their lifetimes than those who do not. An additional insight is that many of the biggest student loan debts are not incurred by someone trying to pick up some career training at the local community college, but rather by those borrowing to finance advanced postgraduate degrees in areas like medicine and law. Thus, Looney writes:

There is no doubt that we need better policies to address the crisis in student lending and the inequities across race and social class that result because of America’s postsecondary education system. But the reason the outcomes are so unfair is mostly the result of disparities in who goes to college in the first place, the institutions and programs students attend, and how the market values their degrees after leaving school. Ex-post solutions, like widespread loan forgiveness for those who have already gone to college (or free college tuition for future students) make inequities worse, not better. That’s clearly true when assessing the effect of loan forgiveness: the beneficiaries are disproportionately higher income, from more affluent backgrounds, and are better educated.

For example, here’s a calculation by Looney of who holds student debt, broken down by lifetime wealth and by race. By far the biggest share of student loans is held by white non-Hispanic borrowers who over their lifetimes will be toward the top of the wealth distribution.

Looney readily acknowledges that student loans can be a substantial burden for certain borrowers. He writes:

There is no doubt that one of the most disastrous consequences of our student lending system is its punishing effects on Black borrowers. Black students are more likely to borrow than other students. They graduate with more debt, and after college almost half of Black borrowers will eventually default within 12 years of enrollment. Whether measured at face value or adjusted for repayment rates, the average Black household appears to owe more in student debt than the average white household (despite the fact that college-going and completion rates are significantly lower among Black than white Americans). One reason for the disparity is financial need. Another is the differences in the institutions and programs attended. But an important reason is also that Black households are less able to repay their loans and are thus more likely to have their balances rise over time. According to estimates by Ben Miller, after 12 years, the average Black borrower had made no progress paying their loan—their balance went up by 13 percent—while the average white borrower had repaid 35 percent of their original balance. These facts certainly constitute a crisis in how federal lending programs serve Black borrowers.

But deciding to cancel all student loans–including those taken out by the doctors and lawyers of the future–would be an absurdly expensive and overly broad approach to reducing racial disparities or in general helping lower-income people struggling with student debt. Some targeting is called for.

As one example, Looney suggests expanding Pell grant programs that provide grants, not loans, to low-income students. It is also possible to expand the programs that tie student loan repayment to income. My own sense is that if there is a political imperative for forgiving some student loan debt, it should be focused on debt incurred for undergraduate studies, limited in size, and linked to income: for example, a program for the federal government to pay off up to $10,000 in undergraduate student loan debt for those with the lowest income levels could make a substantial difference to those who (perhaps unwisely) ran up loans they could not readily repay, without being a bailout for those who are going on to well-paid careers.

The post Who Benefits from Canceling Student Loans? first appeared on Conversable Economist.

Bastrop Threatened by Parks and Wildlife “Prescribed” Burn by El Jefe
Wednesday January 19th, 2022 at 4:53 AM 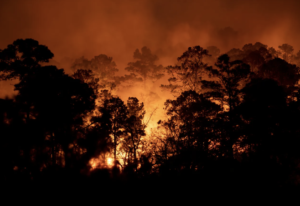 All Texas agencies are run by morons.  In drought conditions, some genius at Texas Parks and Wildlife thought it was a really good idea to light a fire in Bastrop State Park.  The fire rapidly burned out of control, and now homes in the Bastrop area are being evacuated.  Greg Abbott is in Houston lying about the 2020 election and the COVID pandemic, unavailable to do his fucking job.

Welcome to Texas.  Bring your own generator, water supply, and fire extinguishers.

It seems that there aren’t enough voter registration cards to go around in Texas.

Sam Taylor, assistant secretary of state for communications,said supply chain issues have made it harder and more expensive to get paper, which means the Secretary of State’s office will be giving out fewer voter registration forms to groups ahead of elections this year.

“We are limited in what we can supply this year, because of the paper shortage and the cost constraints due to the price of paper and the supply of paper,” he said.

The League of Women Voters registers 30,000 new citizens every year at naturalization ceremonies, and of course that is the group being most impacted by this shortage

Grace Chimene, president of the League, says the Secretary of State’s office has told the League to seek out donations instead of relying on the state for voter registration forms. She said she “didn’t appreciate” this considering the fact her group is a non-partisan nonprofit. However, Chimene said, her group will try and do what it can.

You know, we have plenty of money for our felony indicted state Attorney General to file a mountain of lawsuits against the federal government that are going nowhere, but damn, I’m sure we won’t have enough paper to print ballots in low income neighborhoods.

Where is Dudley Do-Right when you really need him?

Justice Snidely Whiplash Gorsuch has got himself on the Supreme Court.

It’s hard to conger up how evil you have to be to purposely expose someone with diabetes to a disease that would kill them.

Gorsuch’s refusal to mask up on the bench even when asked by the Chief Justice to do so in order that the diabetic and hence immunocompromised Justice Sotomayor could attend in person shows just what kind of jerk Gorsuch is. I wish he weren’t an HLS alum. https://t.co/djLtpKWNtI

To matters even worse – Gorsuch sits next to Sotomayor during judicial conferences. Every other damn justice – even Clarence Thomas and Justice I-Like-Beer suited up and wore a mask.  Not Gorsuch.  Honey, you gotta have a mean streak as wide as Trump’s rump to do something like that.  Sotomayor could not attend except sitting in her office down the hall and calling in by telephone.

You’d think a Supreme Court Justice would …  I give up.